After we found some measure of frozen waterfall success in Munising, we rolled west toward the Eben (like “Evan” with a “B”…I asked 😉 ) Ice Caves. The journey there proved much less perilous than our previous efforts, and the hike wasn’t too bad either.

A nearby landowner graciously allows visitors access across his field, and maintains a packed trail across the snow via snowmobile, making the path much shorter than it would otherwise be. Even though we were in The Middle of Nowhere before lunch on Friday, there were three other cars parked at the end of the road with us. So, while the trail isn’t marked by signage, it is clear where to go. I imagine in warmer months, the trail is an absolute breeze, but with heavy, deep snow, the short (~3/4 mile one-way) hike kept me warm enough to ditch both hats and gloves. Also, there were a few places we opted to sled down on our rears – we were going to end up on them anyway – before continuing on foot.

With no fanfare, the trail ended with a sharp climb up a dry creek-bed, at the top of which hung multicolored ice-stalactites. I steered clear of other picture-takers doing their thing, and meandered my way behind the giant icicles. The grotto was both quiet and loud: the icy drapes blocked noise from the outside, but inside the walls echoed small dripping splashes. 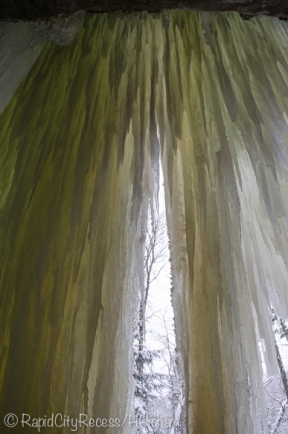 Ice caves from above

Me at one end of the caves

Representative sample of the woods all along the trail to the ice caves
On the way back, we opted for a route along the top of the canyon. I don’t think I’d go that way with small kids, but Tony and I had fun clambering up some icy roots with the aid of a sketch-tastic rope. Following a gourmet lunch of cold cuts on cold bread (is there any other kind when it’s in the single digits?), we headed toward Kathy’s – a great blogging friend of mine at whose home we were having dinner.

We stopped for coffee and photos in Marquette…

Mountain views across the bay in Marquette

Mountain views across the bay in Marquette

Juxtaposition
…and then continued west. Spotting the sign marking the seasonally-closed Canyon Falls roadside park, we pulled off in the just-barely-plowed-enough area and trudged through thigh-deep drifts until we located a trail sign. Once we spotted it, the trek to the river was relatively easy (I’m sure it’s very easy without the snow) and well-marked. Most of the river was frozen over – like the vast majority of waterways in the UP – and covered with snow, but we could hear it splashing under the ice.

Again, the attraction we hiked to see seemed to just appear suddenly. Because of the piles of ice, the river quietly cascaded into a colorful, carved canyon instead of loudly announcing its presence with thunderous spray. Not sure where the rock shelf/ice shelf line was, I kept my usual exploration to a minimum.

Snowy bridge
About an hour later, we were back in the car, once again on the way to Kathy’s. I called her home phone while on the brief stretch of highway where we had mobile service. If you’ve ever reconnected with an old friend who you used to know and hoped was still cool, or connected with someone you’re just sure you know online and hope they’re that person in real life, then you know what we were getting ourselves in to. Kathy and I have been blogging buddies for a couple of years now (I think…and I would ask Kathy for confirmation, but I think she might be less sure than me!), and had breakfast together back in the summer. We had a terrific visit, full chatting, so I wasn’t too worried, but this time we were throwing our husbands in the mix. 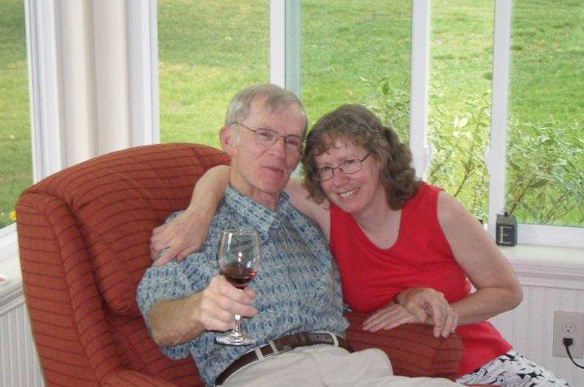 If the well-below-freezing temperatures hadn’t killed both of my batteries, I would share a picture of all of us here. Instead, meet Kathy and her father 🙂

I needn’t have been concerned. Kathy is every bit as cool in person as online, and Barry’s not too bad either 😉 Kathy and Barry were warm hosts, and conversation flowed easily. We all participated a bit in Kathy’s whole foods detox (roasted portobellos stuffed with kale), and also added in salmon with an avocado/grapefruit salsa. (I’ll share the recipe if I ever get back to doing that…) Since I’ve already drug this blog out far enough, I’ll keep it short and say: if the chance to hang out with Kathy and Barry presents itself, do it!

Have you met a new friend or reconnected with an old one? Is that your cuppa tea?

Still to come: The Lovely Laurium Manor Inn, expanses of frozen Lake Superior, and multiple lighthouses. Also, I never know which pictures are going to end up small in the above galleries, but each one has a larger version and I recommend clicking through for the larger, more detailed versions…if you’re a visual person like me.  And last – thanks for hanging through all these words!

23 thoughts on “The Eben Ice Caves and Blogging Buddies”