Just when I had resigned myself to staying inside for the remainder of my blue-sky Friday, the snowplow went by, clearing the way for an afternoon walk. I suited up appropriately and then left the house. Less than a half mile through the four-mile trek, I decided to try running half of it. I wasn’t dressed great for a run – too warm in my down coat among other added layers – but I was eager to try the Yak Trax for the first time, and if you’re a runner (or a previous runner), then you know how strong the pull is once the idea has crept into your brain. However, it’s been…well I don’t know how long it’s been. Suffice it to say it’s been a while since I’ve run because even though we have a treadmill, the only thing it gets used for is cool-downs from other workouts. And because I don’t like to run miles through melty, squishy snow, or in snow drifts. So, I settled for two miles so that I wouldn’t get overheated, and because we had planned to ski Saturday morning (I didn’t want to overdo it).

Let me just say: I love the Yak Trax. Even in places where I could see hints of ice shining through the packed snow, I didn’t feel the slightest slip. Let me also say: packed snow is not a runner’s dream surface. Because I am a horrible goal-post mover, I ended up running 2.6 miles, but it was not the easiest run I’ve ever had. I said the plow had cleared our road; it’s more accurate to say it “cleared” our road. We have different definitions of these things Up Here. The snow pack on the road is a couple of inches thick, and even though the Yak Trax kept me from busting my tush, they did not prevent the inevitable give-and-take that comes with running on a moving surface. It’s not unlike running on loose sand. Regardless, the run went great, and I can now check that particular item off the to-do list. Or add it For Real to my continuous to-do list.

By far the clearest place on the road, and that beautiful barn that keeps cropping up in my pictures:

We awoke yesterday morning to absolutely gorgeous surroundings. The skies were free from clouds overnight, and temperatures had plummeted, thus coating every available surface in thick, glistening frost. 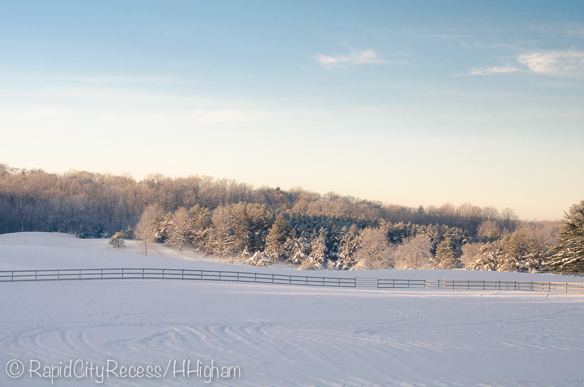 Though I had expected it, my legs didn’t hurt at all from the previous day’s excursions and I was feeling pretty smug. Pretty smug indeed, until I ran upstairs to capture the above photo. I was springing up the last step, when it punched me. Hard. It must have, because otherwise I have no idea what happened. I stubbed both my big toes simultaneously, lurched both knees into the step, and completed my graceless and unexplainable fall by thunking my arm down onto the step. Knees, arm, toes, pride: bruised. Camera: no problem! So that’s all right then.

Crisis averted and smugness checked, we left for Shanty Creek to ski, stopping by the marina in Alden along the way. Torch Lake was shrouded in thick fog – a product of the interplay of relatively warm waters and the -1F (-18C) air above. 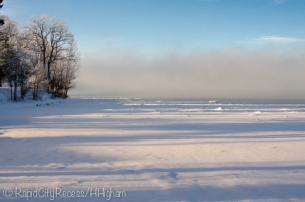 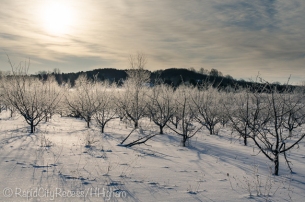 For the first time in three winters, I actually used hand-warmers inside my gloves while skiing. (I frequently use toe-warmers.) We switched “mountains” after an hour, and were pleased by how much the temperature had raised. It was 1F. However, the ten-minute break in the car – still fully dressed in multi-layered ski garb – warmed us up sufficiently for another ninety minutes. By the time we headed home for lunch, we were actually warm. The thermometer confirmed: 24F (-4C)! What a difference a bit of sun makes!

Torch Lake, about 3.5 hours after the above set…no more fog or frost, which I thought was spectacularly beautiful 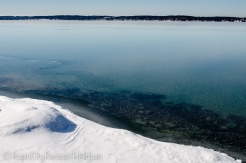 Icicles and sunset courtesy of Jim and Jess’ suite overlook Lake Charlevoix in Boyne City, where we spent the a good part of the afternoon behaving like gluttons. I’ll leave out the gory details 😉

9 thoughts on “In which I run, and ski, and photograph the in betweens”