I don’t know about you, but we had a busy weekend – in the best way. We filled it with things we love, like long walks around the neighborhood, hiking, time with friends, and kayaking. Since I am most eager to share about the kayaking, I’m going out of order and telling you about our Sunday afternoon adventure first 😉

The weather was sort of cruddy when we awoke on Sunday. It was lovely for dewy, foggy pictures (which I did take and will share later), but otherwise it simply made for great reading. By early afternoon, though, the sun had popped out and driven the fog away. Considering the morning’s stillness, we decided to paddle Little Glen Lake – a trip we hadn’t yet taken. After we loaded the boats, we drove in toward Traverse, heading west to the Leelanau Peninsula.

But then, as we rounded the southern edge of East Bay, the call of closer turquoise waters beckoned too strongly. Instead of finishing the trip to our to Glen Lakes, we headed up the Old Mission Peninsula to undertake the 2-1/4 mile trip out to the Metropolis shipwreck – the remains of a 125′ schooner that crashed south of Old Mission Point in a snow storm in November 1886.

We struggled a bit paddling to the first point at the edge of the harbor; the current/wind kept pushing us where we didn’t want to go.

Ironically, as we slipped beyond the harbor’s protection, the water flattened and calmed. Instead of fighting to steer my little boat, I glided effortlessly along, feeling like a water spider. Perhaps not a favorable comparison, but they are elegant on the water’s surface 😉

The rest of the trip floated by, and before we were even looking for it, the shipwreck was under us. 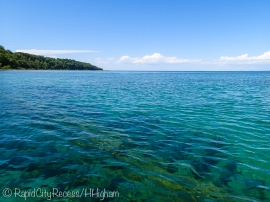 The water is still painfully cold (I know this because I took a nanosecond dip after we returned), so we didn’t bring our snorkel gear this time. But since the Metropolis – this part of it, anyway – only sits in eight-to-ten feet of water, I was able to grab some decent images from my kayak seat:

After nearly fifteen minutes of quiet contemplation and multiple passes above the shallow remains, we angled our kayaks back south. With the winds still blocked, we enjoyed silky waters on our return, which gave us enough advantage to race a couple incoming sailboats.

Even though they didn’t know we were racing, they anchored first. We still won, since we arrived at the beach long before they boarded their rafts for boat-to-shore transit 😉

Back on shore; sailboats with sails stowed on the right…in the water

We finished the afternoon with a bit of time warming our skin on the beach (after 5:00 in northern Michigan, I don’t worry so much about UV), dinner, and a peaceful marina sunset – a soothing ending to a fantastic, if frenetic, weekend.

19 thoughts on “Visiting the Metropolis (Shipwreck)”