After five years in northern Michigan, the Old Mission Peninsula and its lighthouse are familiar and well-loved places. We often drive along the shores of the peninsula when the weather is not ideal for getting out in – and sometimes even when it is. It’s idyllic, rolling farm country, and I feel at home there. (In fact, we nearly moved there when we relocated from Rapid City.) We’ve kayaked from a few spots on the east side, multiple times, and we’ve paddled out to Power Island farther south on the west side, but we had never put the boats in at the lighthouse. Until last night. 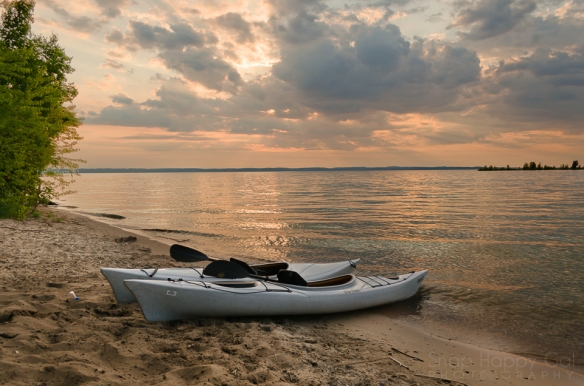 Ironically, we had set out with the intent to again paddle around the Old Mission Harbor at Haserot Beach, but with winds out of the east, there was more chop than we felt like fighting. We hadn’t unloaded the boats, so we decided to give the other side of the peninsula a try – if it didn’t look good, at least we’d be in time for a sunset. 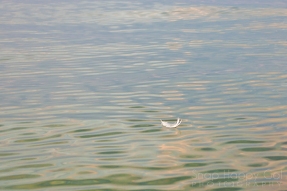 Much calmer waters greeted us, and we tossed the kayaks and accoutrements in the water before the mosquitoes had time to feast. Though we had no plans upon arrival, we quickly set our sights on the north end of the islet that was almost directly in front of us. As we approached, the cacophony of bird-screech (decidedly different from birdsong) announced the tiny island as a rookery. Though we had no plans to do so, this underscored that we would not be disembarking for island exploration.

The sun, which had been a showy and welcome presence, dipped below some hazy clouds taking its drama – but leaving a profound serenity. Not an altogether bad trade, I suppose.

We paddled farther north as we returned to get a better angle on the lighthouse. I imagine other kayakers and boaters have seen the view before, but this was the first time I’ve seen the Mission Point Lighthouse from so far away. It’s even more quaint and tucked away than it seems from the beach. 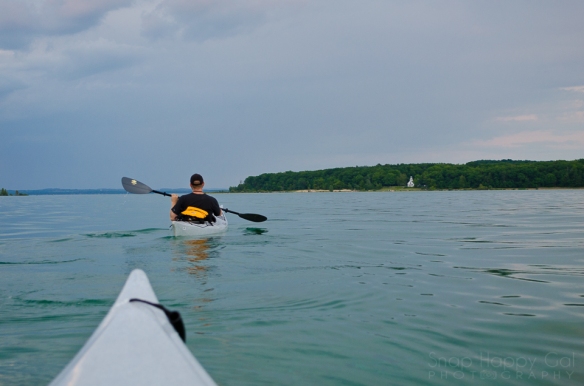 Various bugs – including climbing numbers of mosquitoes – increasingly visited, beseeching that we share our eyes, ears, or blood. Declining, we began the paddle back.

As we neared shore, I paused (well, actually I circled a few times until I was lined up, and then I paused) to appreciate the simple beauty of a few boulders strewn under the water’s clear and shallow depths. Sometimes it’s the simplest scenes that leave the biggest impressions.