Eliza, who shares a similar love for the outdoors as me, and who lives in a similar place but different country invited me to join a black and white photo challenge. Since It’s all in good fun, and since it’s so windy out, I’ve decided to play along. At least once. There are rules, as with any contest/challenge, but I’m not playing by them 😉 So, new rules: if my post inspires you to try your hand at a black and white photo when you might otherwise opt to see the world strictly in colors, link it up to this post. If there are multiple participants, I’ll post a future blog shouting out my favorites. Or something.

Without further ado, here’s the photo – perhaps the only one, perhaps just the first – that I chose to convert to black and white. I originally shared it on FB and Flickr in all its peachy sunset-y glory, but decided it had nice enough lines to lend itself to B&W too.  I posted larger versions of each below, which can be further embiggened via a click if you like.

What do you think? 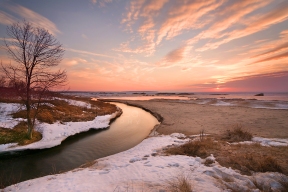 Despite cool temperatures, Tony and I had decided last evening would be perfect to revisit a hike in the Sleeping Bear Dunes. Clouds had cast a pall on the landscape all day, but the forecast promised clear skies shortly after work, so we packed up Petey and headed for the west coast.

The clouds parted about five miles into our drive, and we basked in the sun’s warmth. However, as we neared the park, threatening skies loomed and we checked the radar. Our 0% chance of rain had been upped to 40%, and a small system was clearly blowing in from Lake Michigan. Not wanting to get caught in a rainstorm two miles into a hike, we altered our plans. Instead of walking the Dune Drive, we opted for a few shorter treks, starting at North Bar Lake.

This is what it looked like from the overlook on November 3, the last time we saw it (we went again at the end of November, but it was snowing too hard to make anything out). 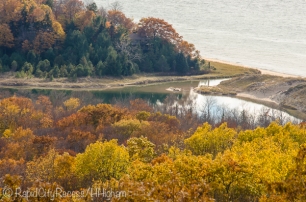 We followed the short trail from the parking lot down to the lake, and then skirted along the edge.

This is the little lake in the photos above: North Bar Lake

Winds picked up as we climbed the dunes separating the Big Lake from North Bar, and rain sprinkled down. We decided to take in just the high view of the lake instead of venturing down farther into the wind. But we were in good company. An eagle was perched on high as well, surveying the lake for dinner. Glad it wasn’t us 😉 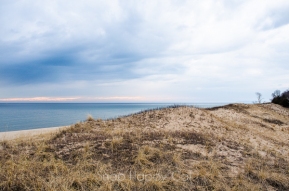 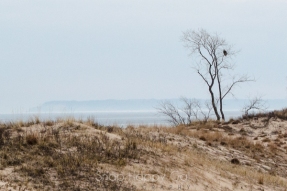 Next, we retired to the Empire Beach, our old standby. Even if the weather is downright yucky, you can sit in your car, protected from the elements, and enjoy the view…which is exactly what we did for a bit.

I did get out of the car for this one, just not for long. Yes that is still ice on the lake.

I’m not entirely sure why, other than it seemed like a good idea at the time, but after I grabbed my pre-sunset shot, we decided to head down the road. I think we were hoping for a chance to hike around near the shore while waiting on sunset. Things had not worked in our favor so far, but we decided that if we returned to Traverse City, we’d arrive right along with the rain we were currently waiting out. So, south we went, where we were hoping the rain would surely, eventually pass.

We were rewarded almost immediately. It didn’t suddenly get warm, and the winds didn’t die down, and the rain didn’t leave, but a beautiful sunset was waiting for us at the end of the road. I meandered with the camera, Tony meandered with Petey, and the sun meandered toward the horizon. 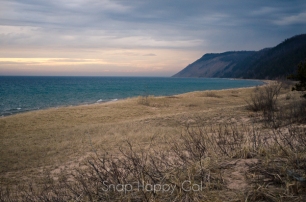 Again, probably because it is in my nature to wander, even though were in a delightful location, I thought it would be a good idea to travel farther down the beach. Just on the other side of Otter Creek. When you come down the road to the beach, you have two options: park right at the beach, or park off to the left before the beach so that you can explore Otter Creek. Instead of moving the car, though, we just decided to walk (it’s not very far, and we were glad of a chance to move). Just as we started making our way back out toward the open water, the rain really let loose. Tony – gentleman that he is – took Petey and went back for the car while leaving me to my photographic devices. 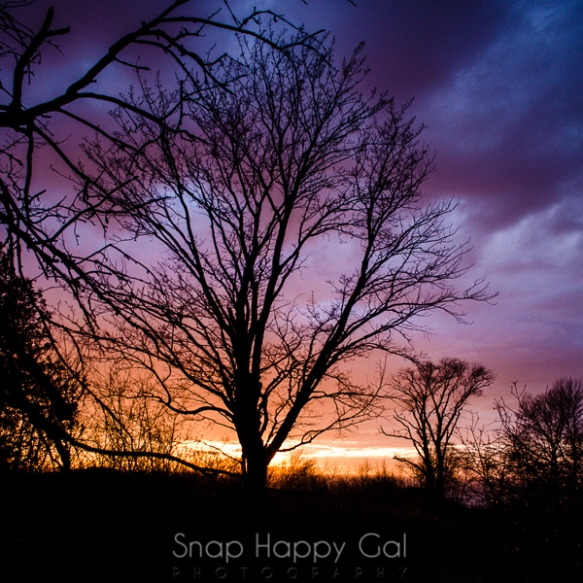 I clambered through low shrubs and downed trees, making my way to the creek and lake. As I stood capturing tree silhouettes in the falling rain, I looked over my shoulder, hoping to see a rainbow. Given how the trip had gone, I wasn’t hoping very fervently.

For once in the evening, the weather cooperated. And then Mother Nature decided enough was enough. She turned off the faucets (mostly), and let the light shine. I set up a few places along the bluffs, thoroughly amazed at the progression of the setting sun. The area around the sun was dressed in vibrant yellow, the clouds overhead were bruised purple, and a short-lived shower over the lake absolutely glowed red.

This is one of many great shots I got. I’m not done processing them, but they’ll be making their way to my Facebook page and my photography site over the coming days, so keep your eyes peeled 🙂

As the pink tinge faded out of the sky, Tony popped up over the dunes behind me. I grabbed one last image before running to greet him, (you can’t see him, but he’s in the photo – dressed in black against the black background) grateful for the evening if not for our broken hike. 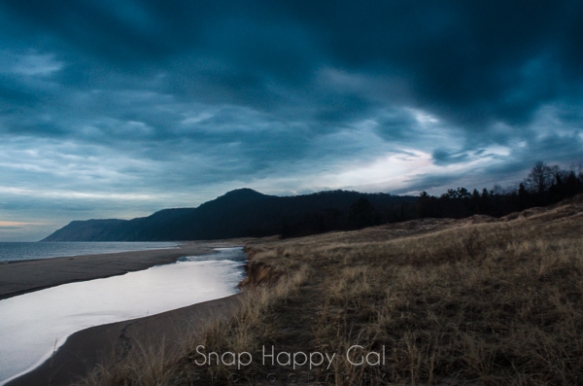 Just not here. Somewhere though, it is spring – full of birdsong and pleasantly crisp air. Here in northern Michigan, we will have to content ourselves with a bit more winter. Since the sun is spending increasing amounts of her time with us, it no longer feels so dreary, and so even though it was only in the twenties today, this weekend somehow managed to feel like spring. END_OF_DOCUMENT_TOKEN_TO_BE_REPLACED