There’s more snow above that mailbox than there is below.

Yep, that’s a lot of snow. Our inland lakes are frozen, with the snow on top forming drifts, and over half of Lake Michigan is frozen. Some days it seems like a featureless landscape, and fighting off ye olde seasonal affective disorder can be a chore. Normally, we’d just jaunt off to go skiing, but our schedules have been less flexible lately, and it has been cold. Thus, when the clouds part to reveal the blue sky they’ve been concealing, we go adventuring.

…And because it’s still winter in northern Michigan, sometimes the clouds swallow the sky right back up as we’re on our way for a hike. Too late, though; we were already on our way, so along we went, to the mouth of the Platte River. Our dearth of moving water meant that we appreciated the short stretches of exposed river wending its way into Lake Michigan’s icy expanses. 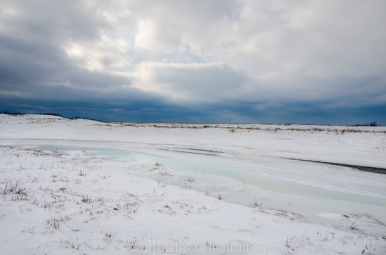 Tony, Petey and I meandered along the beach (there was sand to walk on in places – sand!) and then scampered out onto the near parts of the ice shelf for our weekend explorations. Occasional peeks of the sun added a touch of drama to the sky to compliment the ice formations. 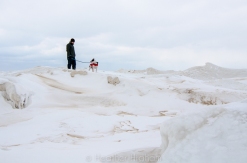 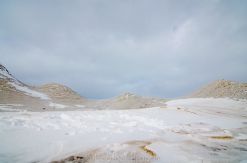 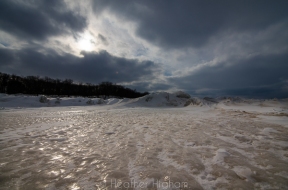 After a bit, we headed south to check out the Pt. Betsie Lighthouse. We were there just before Christmas, reveling in the blue waters despite our constant grey skies. Yesterday revealed a different scene. Ice stretches nearly to the horizon; from the top of the dune, you can just make out a hint of open water.

It’s a surreal thing, absorbing the beauty and irony of a lighthouse perched above a giant frozen lake. This lighthouse is always a favorite, but I particularly love how the ice near the shore retains its characteristic teal color. 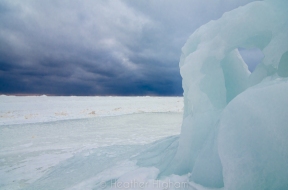 Not long after we left Pt. Betsie, lake effect snow again blew in, blotting out any color in the sky. With a projected high of 6F tomorrow, I am ever more grateful for the ability to take spontaneous refreshing, recharging trips on the weekend. I hope you’re recharged for the week ahead.

After the northern lights adventure on Tuesday night (okay, early Wednesday morning), we decided a post-work kayaking excursion was in order. I had less than four hours of sleep the night before, and Tony didn’t sleep much more, but we looked at the forecast, and Wednesday was our best bet for an enjoyable trip in the foreseeable future.

I grabbed a maple cinnamon latte (the details are important here – you should request one of these from your favorite coffee shop!) so that I’d have the requisite caffeine to keep me awake on the ride home. Except for my once or twice a week lattes and the very occasional soda, I don’t have caffeine anymore and my body doesn’t react great to it. Shakes and high temperature, and all that…but it does keep me awake, so I imbibed. 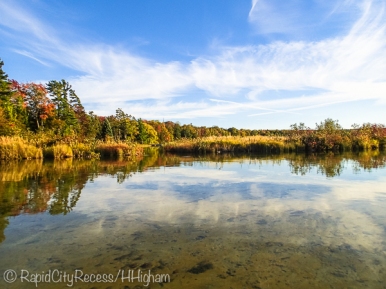 We didn’t get the boats in the water until 5:30 or so, giving us just under two hours until sunset…for a trip that usually takes just over that time. Plus we were alone, so we’d have to make the trek back to our origin to get the car. No big deal: paddle faster 😉

Normally during the fall salmon run, the river is loaded with fishermen angling for one of the monster fish that are fighting upstream. By the time we got to the fish weir, which is piled with fish – and then normally just downstream with fishermen – we had only seen one other person on the water. There was a gentleman raking debris from the underwater gates at the weir (it must be operated by the DNR and not the NPS) who kindly warned me to take care: he had seen salmon accost a lady just the other day, and she left with a bloody (broken perhaps) nose. Duly noted.

As we continued our journey, a few flocks of mallards winged upstream overhead, and a heron retreated downstream, eventually giving over to the woods for escape. Finally, we caught up with a few fisherfolks (there were ladies, too!), but nothing like the weekend hordes we often encounter on this trip. We navigated around a guy wrestling a coho, and then hastened on. 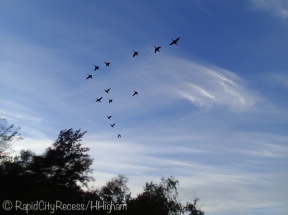 Abruptly, we arrived at the El Dorado landing, an access point about a mile before the planned end of our trip. However, thanks to lingering at the fish weir, and not actually paddling faster, the sun rapidly approached the horizon. We dropped the kayaks off to the side of the landing, and began our two-mile walk back to the car.

About halfway there, I glanced over my shoulder, noting the salmon-colored clouds. I grabbed the key from Tony and jogged the rest of the way to the car. He didn’t want to load the boats in the dark, but I’m more practical: if we didn’t hurry, I might miss a pretty sunset.

Crisis averted. One last stop for photos, and then we recommenced the voyage, this time to rectify the now obvious lack of food in our tummies. All in all, the trip was hectic, but it was still a perfect way to unwind and soak up some fall beauty. Ahhhhh! 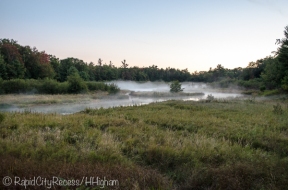 Ah solitude. Something you won’t find around here today. Tony and I went for our four-mile walk around the block this morning, and it sounds like summer. Not the bugs and breeze and soft crunch of wet sand, either, but the incessant thunder of boats racing on the lakes.

Tourism slowly ramps up following Memorial Day and crescendos today, July 4th. I don’t blame the tourists for flocking up here – after all, I used to be one – but I don’t miss them when things calm down again after Labor Day. Since it’s appropriate, I’ll just remind myself that they have the freedom to travel up here (and back to their homes!), and for that we should all be thankful.

Okay, done grousing. Instead, I’ll share a bit of quiet time we captured on a recent after-work outing. Because the rivers and lakes do get so busy in the summer months – especially on the weekends – we opted for a mid-week evening trip down the Platte River in Benzie county. It’s clear and mostly shallow with a sleepy current, and is one of our favorite paddles. We always see large fish hovering in the depths in the river bends. We often spot whitetails and heron in the wide wetlands. And we sometimes witness the activities of other water-dwelling creatures.

On this particular trip, we didn’t see any deer, but we did see several woodpeckers, and only one other human (walking his three dogs upstream) for the entire 2.5 hour duration. Oh yes, we also floated downstream with an adventuresome muskrat, too (bottom, left photo in the gallery).

Happy Independence Day. May you spend it however you best enjoy it – even if that is in northern Michigan roaring around on a lake that I’d rather experience in quiet serenity.

Click any photo for a larger version in a slideshow 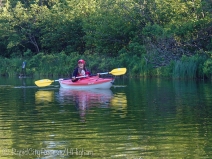 Just not here. Somewhere though, it is spring – full of birdsong and pleasantly crisp air. Here in northern Michigan, we will have to content ourselves with a bit more winter. Since the sun is spending increasing amounts of her time with us, it no longer feels so dreary, and so even though it was only in the twenties today, this weekend somehow managed to feel like spring. END_OF_DOCUMENT_TOKEN_TO_BE_REPLACED

A sad thing happened today. The sun came out and the temperature rocketed all the way up into the low 40’s (4-5 C). That’s not sad to you? What if I tell you about how some of our beautiful icicles crashed to the ground, or how some of our loving skiable snow melted and dripped away? Okay, okay. I’ll just feel sorry for myself then. END_OF_DOCUMENT_TOKEN_TO_BE_REPLACED