Halfway through August, we are nearing the end of our “summer B&B” season. Summer’s not over yet, though, and splashing in the water with our work friends (who just wrapped up a week-long visit) whetted our appetite for more time in our unsalted waters.

I remember being chilly when we lived in Miami…when the temperatures dipped into the mid-70’s. Now I’d be happy if it never got warmer than that. Except the high temps make the water nice. We were having a tough time deciding between a kayak trip or a swimming trip, and the mid-80’s we’re scorching in settled it. 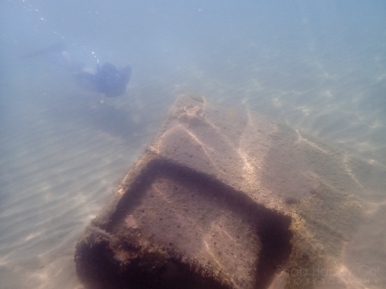 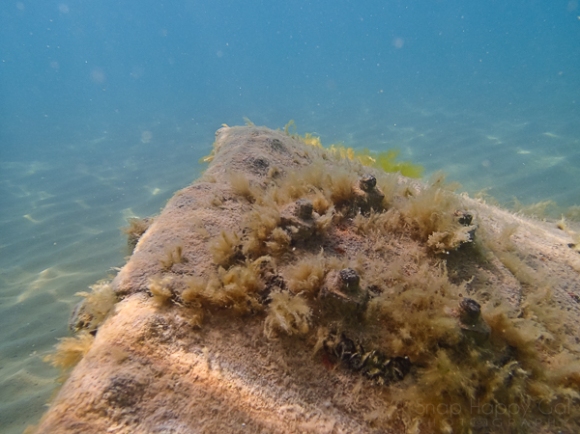 We rode the half hour over to Glen Arbor, and joined scores of other folks there on the beach. Though it was busy, it wasn’t packed to the point where I felt like a sardine in a tin can of humanity. Still, I didn’t mind when we swam away from shore to be with the fishes. 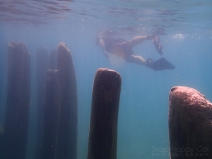 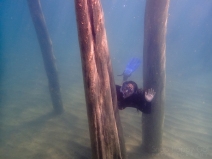 I’d have been cool without my rash guard on, but a thin neoprene layer up top was sufficient for our time out. We kicked over to a submerged pier, and discovered some wreckage along the way. It’s funny how mundane things gain interest when they become the underwater home to algae and mussels. 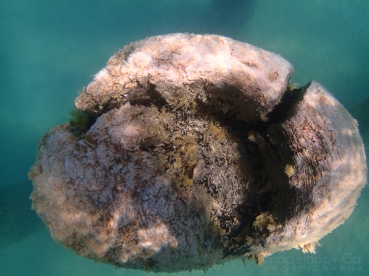 The pilings were less intriguing than I had imagined. I expected lots of algae, and perhaps some elodea and fish. Instead, there was just some algae, no seaweed, and only tiny fish. Still, the pier’s remains were expansive, interesting, and a touch spooky. 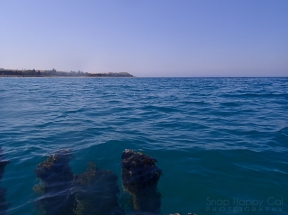 The expanse of the lake itself can be a bit spooky, but it was calm (no fear of rip currents), and it’s unsalted (no sharks). I eventually got chilly, and we were both hungry. We returned to shore to bask in the now comfortable afternoon heat to dry off before the ride home. What have you been doing to stay cool?

PS – Life’s been pretty busy these past several months, and I have no idea if it’s going to slow down. I felt compelled to write tonight, but I don’t know when that urge will strike again…or when I’ll have time. If you want to sorta follow along, or just look at photos, I do still post regularly to Facebook and Instagram 🙂

With abundant corals, urchins, fish, eels, and turtles, Maui’s reef ecosystem offers a visual cornucopia just steps from the beach. Like many visitors to the island, Tony and I were in the not unique position of wanting to spend some time exploring Maui’s coral reef. In the course of a week, amid other excursions, we fit in four solid snorkeling trips, and I squeezed in a short fifth outing while we relaxed on Hana’s red sand beach. END_OF_DOCUMENT_TOKEN_TO_BE_REPLACED

If you’re a regular reader, you may have missed me over the last several days. Tony and I returned today from a week with a best, good friend in Maui. We left the island yesterday just past noon, and arrived in Traverse City this morning around 8:30. We’re still a bit jet-lagged, though I will say the 3-4 hour nap helped tremendously, even if that does make it two days in a row that went breakfast…dinner with lunch stuck in the time vortex.

But you didn’t come here to listen to my travel complaints – you (probably) came here for sea turtles. We actually rose with the sun (or earlier) each day, and had a week full of adventures including multiple snorkeling expeditions, a kayaking outing, a driving/exploring tour of the island’s circumference, a few hikes, and yes, a bit of surfing. In retrospect, I probably should have tried to fit in more surfing, because I love it even in my completely novice state. Still, my favorite thing this trip was swimming with the sea turtles. END_OF_DOCUMENT_TOKEN_TO_BE_REPLACED

After work this afternoon Tony and I strapped the kayaks on top of the little GTI, grabbed the dry bag, and drove up to Elk Rapids. With a pretentious mobile device (my loving yet appropriate moniker for “smart phone”) in hand, we located the ship wreck we had previously failed to find. END_OF_DOCUMENT_TOKEN_TO_BE_REPLACED

We fervently wished that we’d get but one glorious Michigan late-summer day while all our friends were visiting.  Alas, the weather is a cruel mistress; we were denied.  Since then, though, it has been paradise: almost cloudless mid to upper 70’s during the day, and clear cool nights.  You’ll no doubt be surprised to learn then, that we spent a good bit of the day yesterday on Torch Lake.

Looking northeast from the sandbar